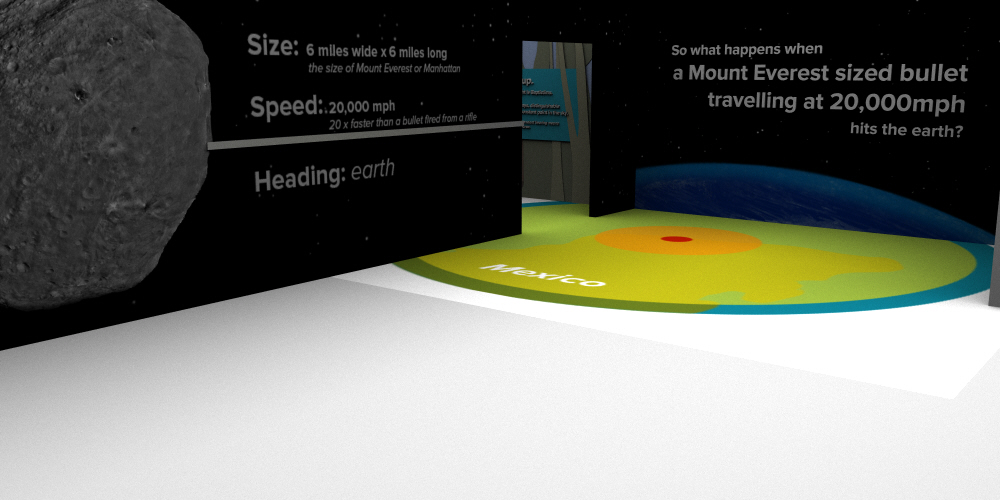 The Radiolab podcast strives to make science accessible to a broad audience. Each weekly episode centers on a theme, such as time, space, or thought. For my two-week final project in my Rhino class, I translated their Dinopocalypse episode into a museum exhibit. In this episode, the hosts walk the audience through an alternate version of the familiar asteroid impact story. According to this theory, the dinosaurs were baked to death by falling debris instead of slowly freezing from dust blocking the sun.

I enjoyed the challenge of transforming an auditory story into one that could be experienced in physical space. Each room corresponds to an “act” in the original episode. 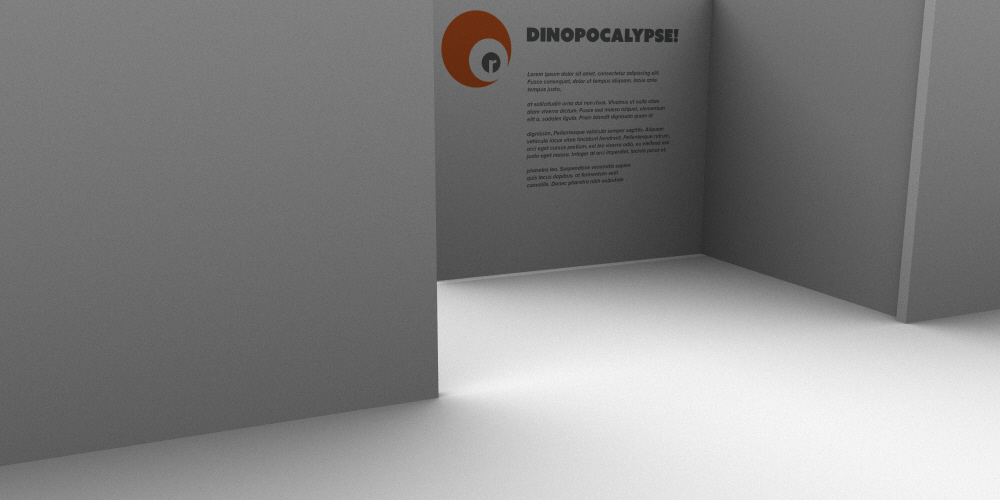 Visitors enter the space and learn about the era of the dinosaurs and what we know about the asteroid that contributed to their extinction.

The line that runs through the exhibit represents the K-T Boundary, the thin line of iridium-rich rock left by the asteroid impact that separates the Cretaceous period from the Paleogene period. Dinosaur fossils fall off sharply above this line, for obvious reasons. It passes through the entire exhibit, a constant reminder of the power of the asteroid that eliminated the dinosaurs.

As they turn towards the back wall, visitors see a relief of Baptistima, the asteroid that struck the Earth and set off the extinction of the dinosaurs. The quotes on the wall are from the original Radiolab episode.
Visitors walk over a representation of the impact site and can read about its discovery. 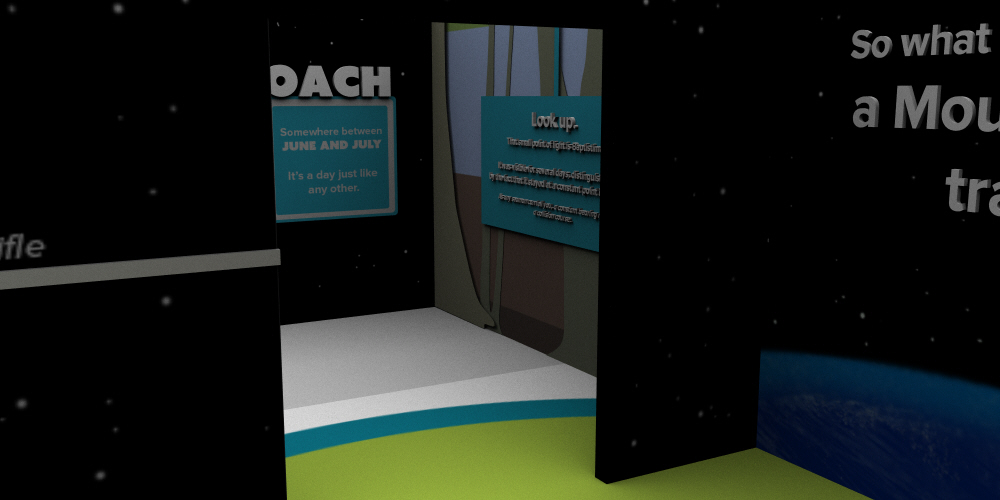 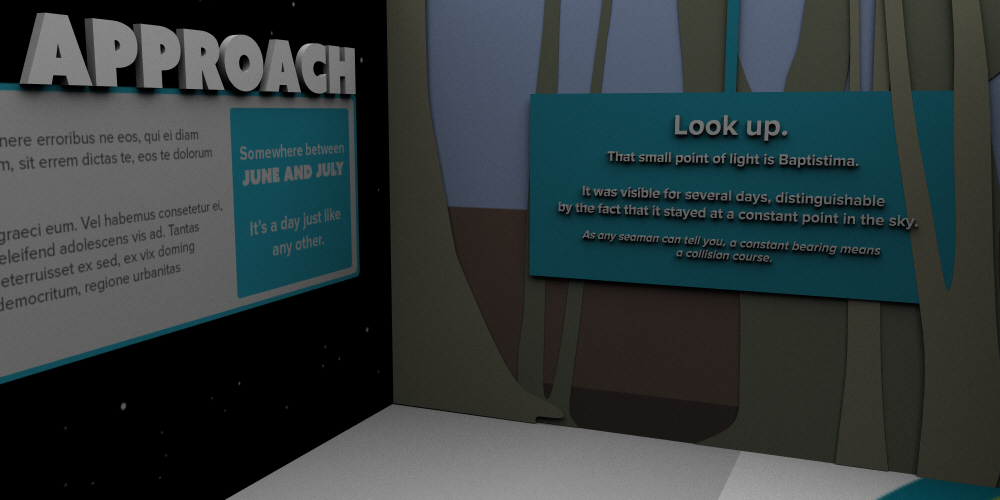 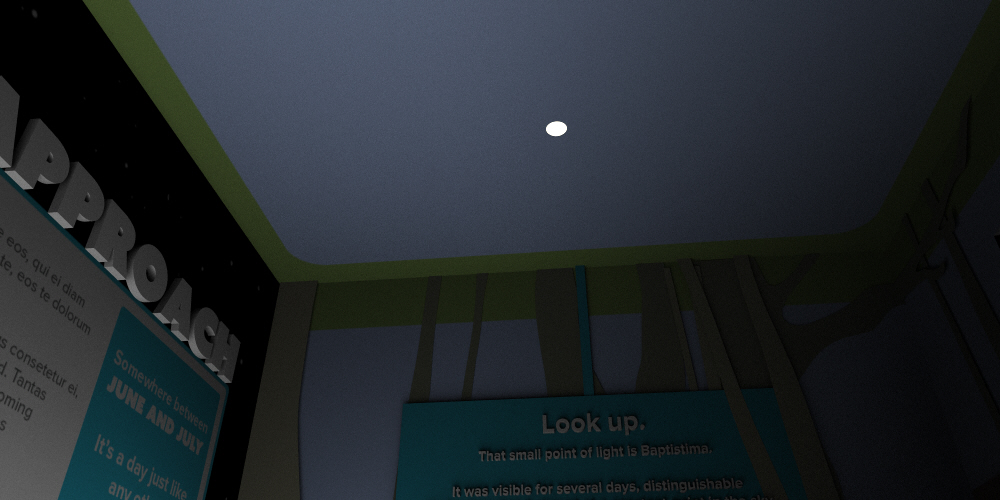 One of the most striking parts about the episode was their description of what Baptistima’s approach would have looked like from the Earth. I wanted the visitors to experience this as they moved through the exhibit, so I designed the halls to give them a distinct sense of place. One wall tells them about Baptistima’s course through space, and the other about what was happening on the surface.
At one end of the hall, a small light on the ceiling represents Baptistima as it would have looked from the surface several days before impact. 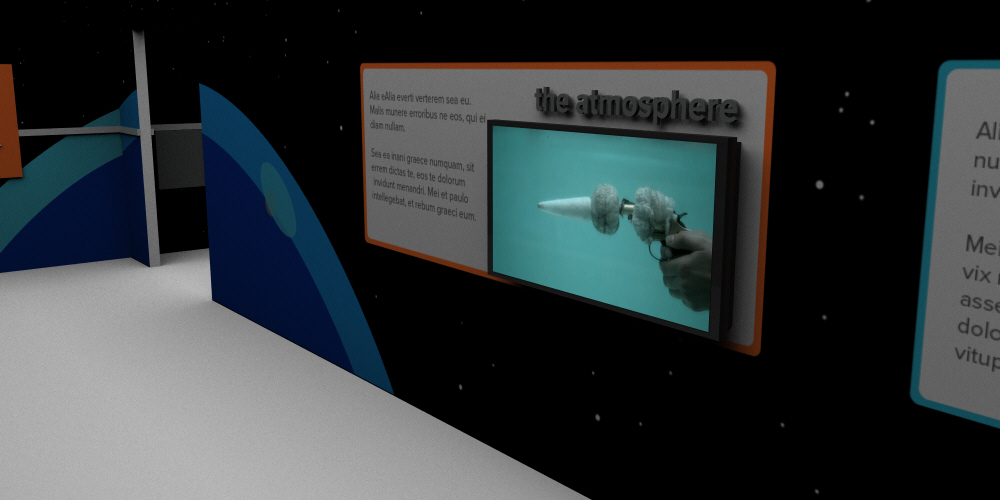 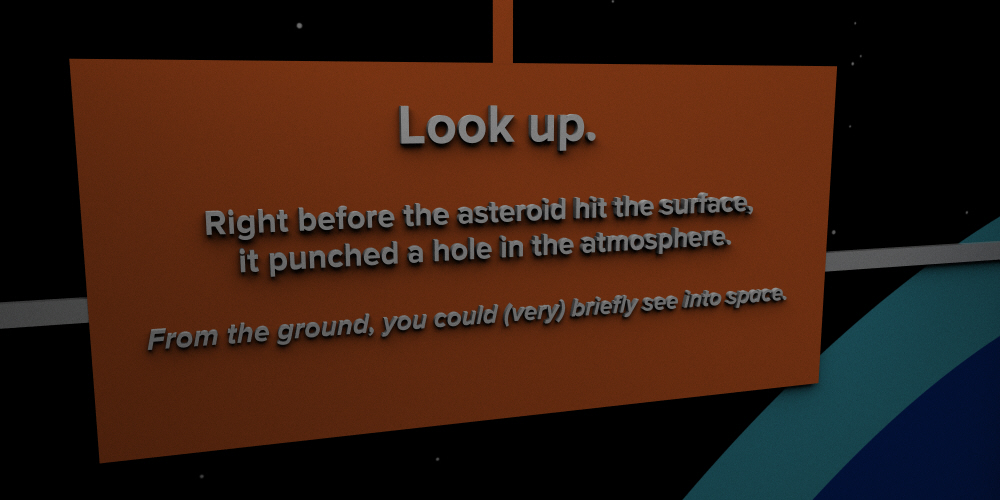 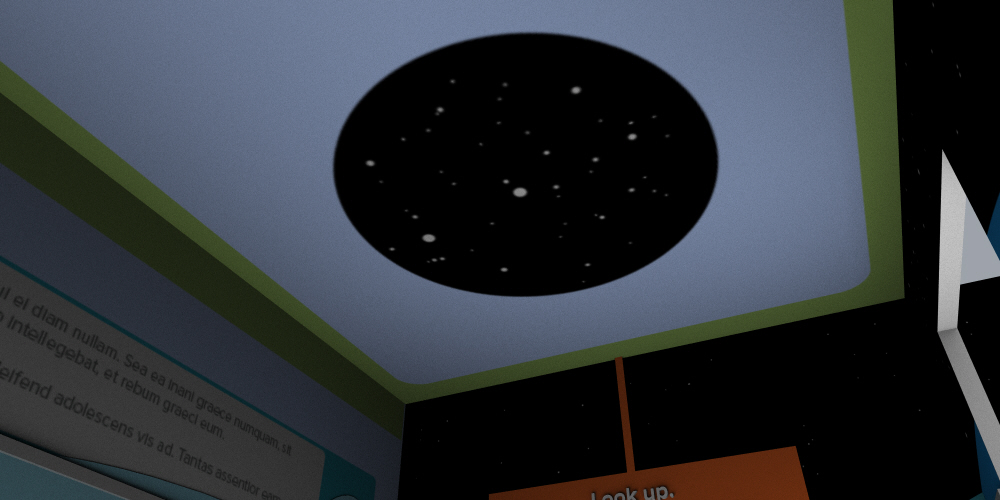 The episode described Baptistima punching through the atmosphere using the metaphor of a gun firing underwater. Here, a video illustrates this concept for visitors.
At the far end of the hall, a hole in the ceiling shows the night sky. Like the bullet, Baptistima literally pushed the atmosphere aside in the split second before impact. If a dinosaur had looked up at that moment, they would have seen outer space. 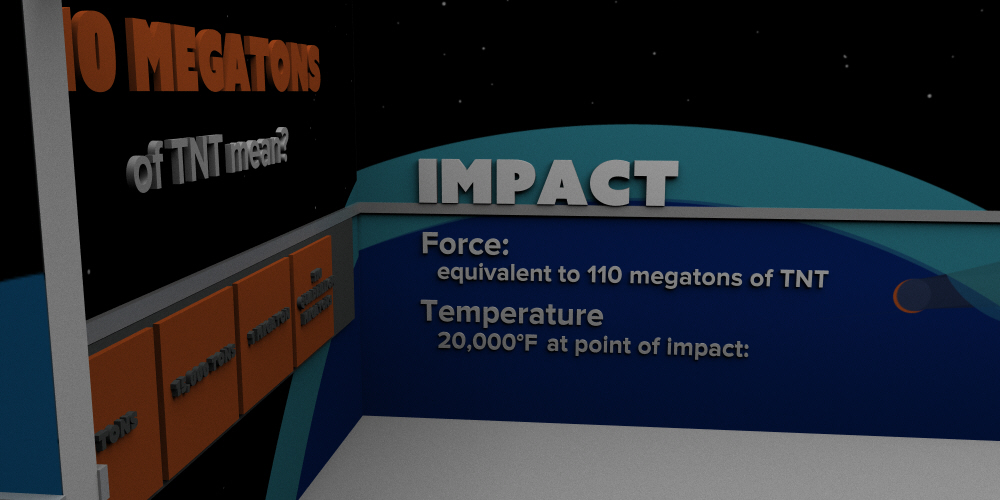 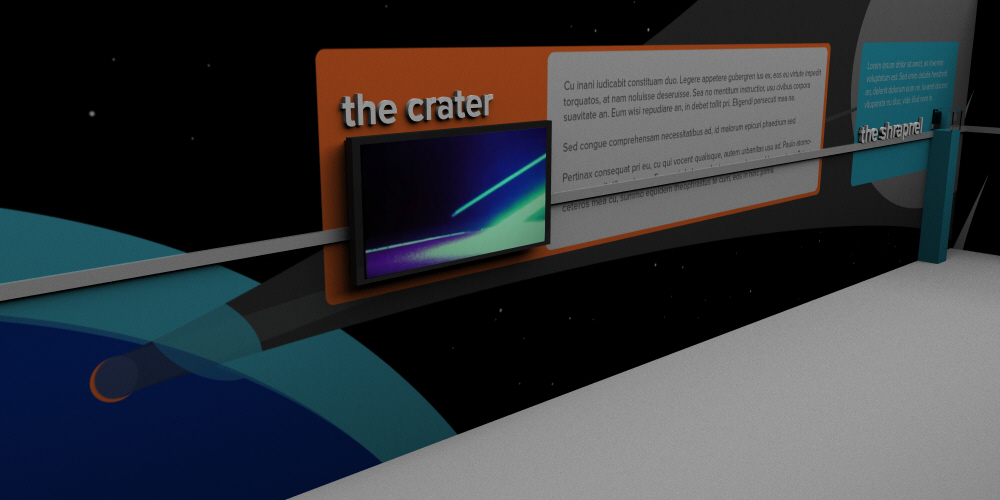 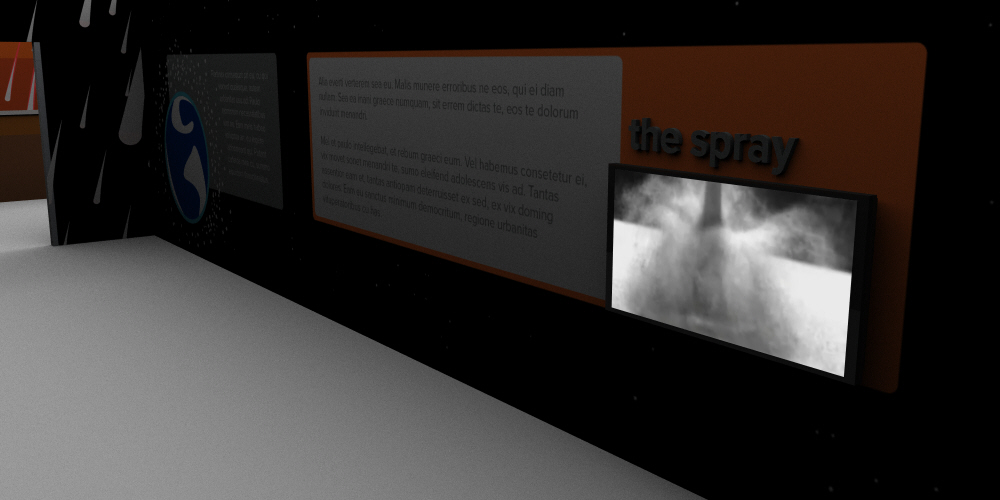 Visitors can flip up the panels to compare the power of Baptistima’s impact to that of other well-known explosions, such as a hydrogen bomb, which were used in the original episode to illustrate the power of the explosion.
Baptistima hit the Earth with such force that it vaporized the rock underneath it, sending a plume of debris into space through the hole it punched in the atmosphere. One screen shows a steel ball falling into sand as an illustration of the forces at work. The other screen shows a simulated impact. Explosions of this force are almost unimaginable without some help. 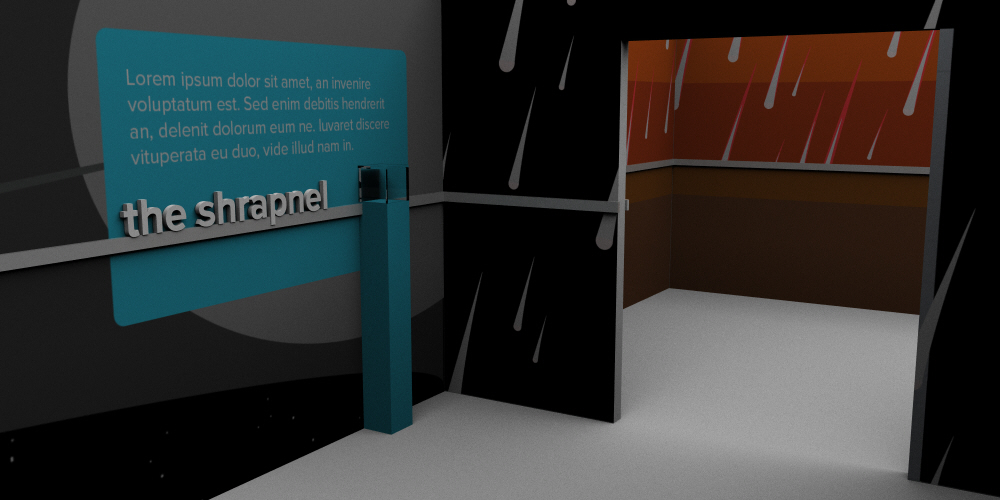 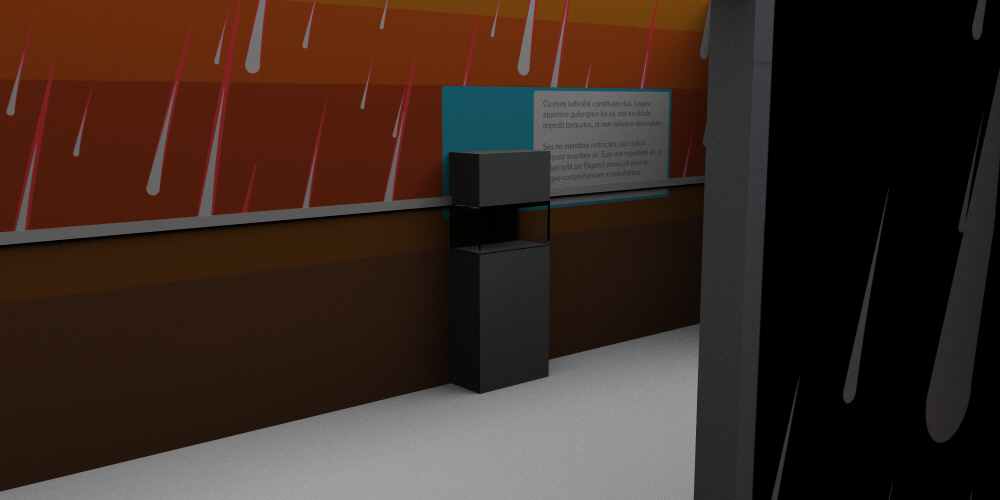 The rock vapor spread out and condensed into small beads, which fell back to Earth. These beads can still be found. Examples would be displayed in this pedestal. As the beads fell back to earth, the majority burnt up in the atmosphere, each one adding heat to the air. Eventually, the surface temperature became hotter than an oven, killing every animal on the surface. Those below the surface were safe, because dirt is a fantastic insulator. At this pedestal, visitors can experience this insulation by sticking their hands into a space protected from a heat lamp by a thin layer of dirt. 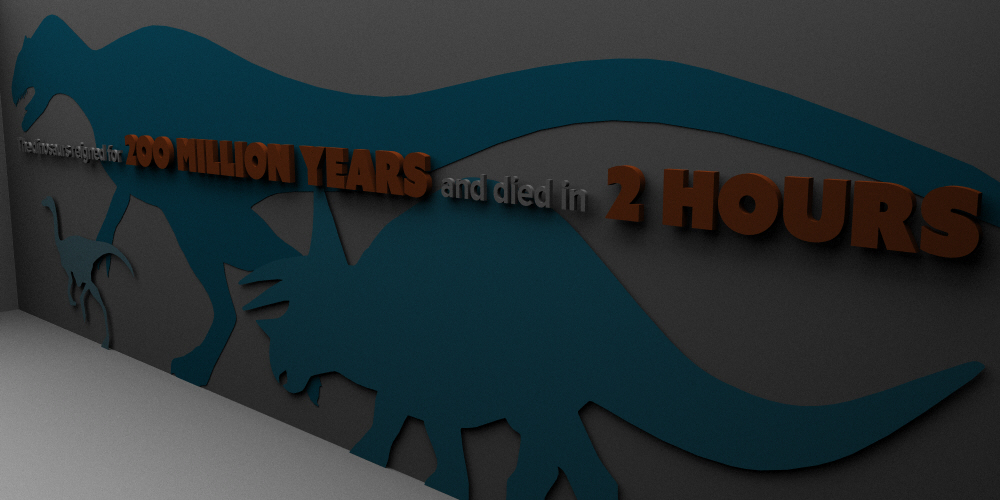 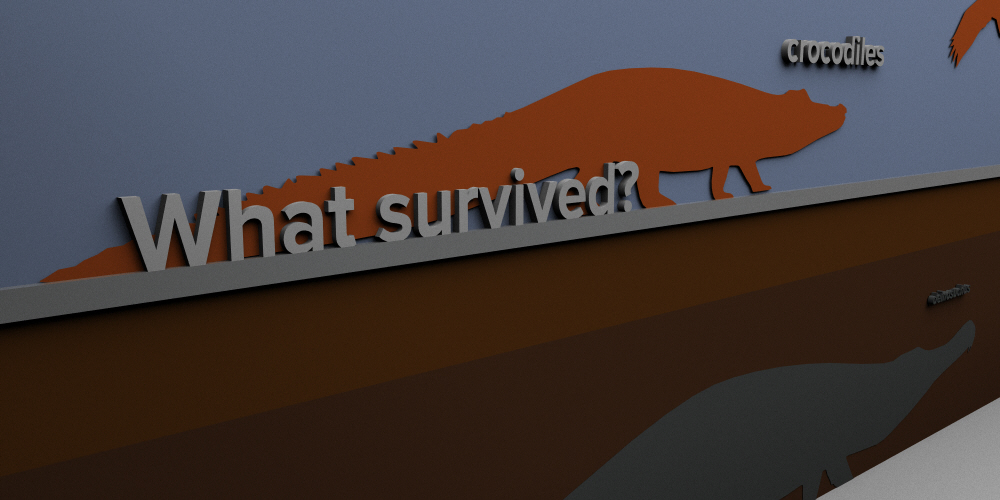 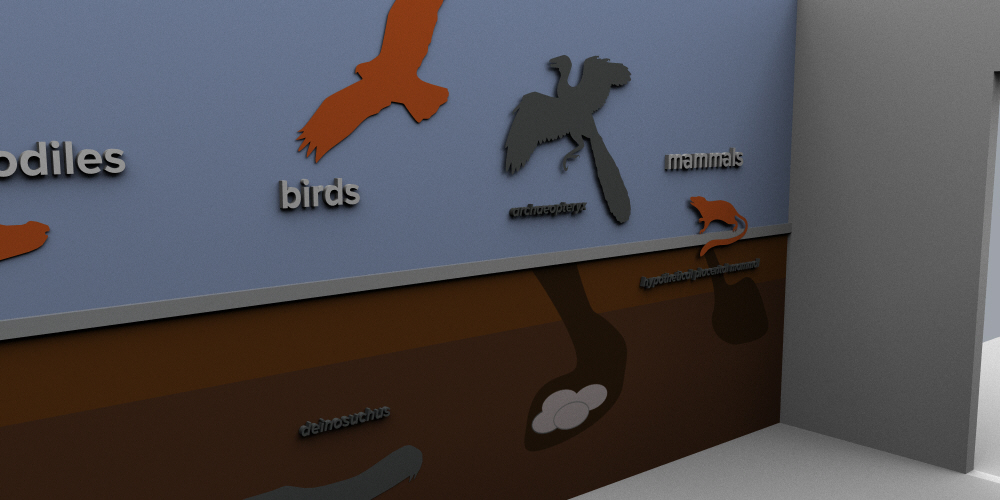 A quote from the show delivers the take away of the show: “The dinosaurs reigned for 200 million years and died in 2 hours.”
The opposite wall shows which animals were able to survive, and their descendants today, such as crocodiles and birds. 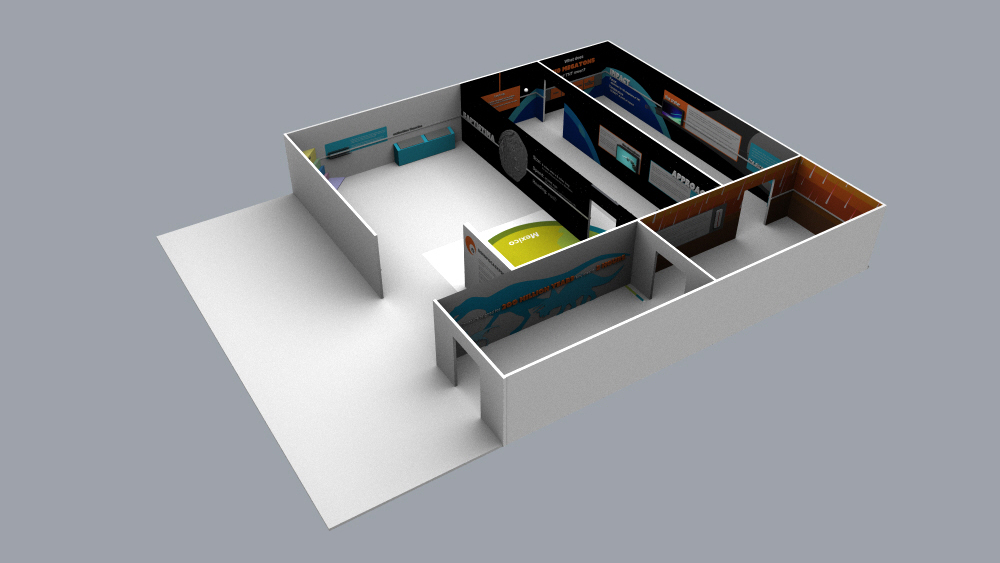